I find wooden panels to be decorative, distinctive and warmer than paintings. All the objects here are hand-carved and hand-painted. Unfortunately, wooden objects do need some extra care. Occasional application of lemon oil will bring out the lustre of the wood and keep the surface from cracking. Some wood finishes should not be oiled: I will indicate which ones these are.To understand the cultural significance of panels and masks, it is important to have some knowledge of The Ramyana Tale and the Mahabharata Epic, two Hindu epics that form the religious teachings of Bali and much of Java. In some ways these epics could be compared to the Old and New Testaments of the Bible. Parts are presented in dance performances, masked plays and shadow puppet shows [the most sacred]. Everyone in Bali and parts of Java recognizes the major characters of these epics. Also important is The Barong Play, which is only known and performed in Bali.

This is a play about the struggle between good and evil. Barong is a benevolent, fun-loving mix of a shaggy dog and lion which is played by two men. He is the protector of mankind. Rangda, a widow witch, is the representation of evil. (Yes, men, the Balinese devil is female!) The kris (a curved sword) dancers try to kill Rangda, but she puts a spell on them on them. When they realize they are unable to destroy evil, they turn their swords on themselves. Then it is Barong’s turn to cast a spell: The krises are unable to pierce their chests. The Balinese believe that you cannot eradicate evil, but you can control it. If you go to Bali, don’t miss this play!

This famous Hindu epic is believed to date back to the 12th century BC, but the first surviving source was composed in the 1st century BC. In Thailand this epic is called The Ramiken and there are many artistic representations of it there.

Through no fault of his own Rama, the crown prince, is banished to the forest for 14 years. Sita, his wife, and Lasmana, his brother, beg to go with him. Rawana, the evil king of Sri Lanka, sees Sita and wants her for his wife. He tricks them by creating a beautiful golden deer, which Sita wants as a pet. While she is unguarded, Rawana abducts Sita and flies with her to Sri Lanka. Sita refuses all his advances.

Meanwhile, Rama is frantically searching for Sita. A monkey general tells Rama that he has seen Rawana flying away with Sita. Hanuman, the great white monkey king, and his soldiers eventually defeat Rawana. Rama and Sita are reunited and crowned king and queen of Ayodya.

The longest epic poem or story in any language, this Hindu epic was compiled in the 2nd or 3rd century BC. The eldest of the Pandawa brothers is the rightful king, but their cousins, the Korowas. scheme to seize the throne. Arjuna, the hero of the epic, doesn’t want to go war against his cousins, but Krishna (a re-incarnation of the Hindu god, Vishnu) persuades him that sometimes it is necessary to fight against evil, and helps him to win the war. It is interesting to note that all five Pandawa brothers are married to one wife, Drapudi. However, she tolerates some of her husbands’ affairs.

Hinduism was brought to Indonesia by peaceful means – mainly through merchants. Shadow plays of the Hindu epics in Java date back to about the 10th century AD. The Javanese added some comic characters, the servants of the Pandawa brothers, Semar and his sons. The Ramyana Tale seems to be more popular in Bali, while the Javanese seem to prefer the Mahabharata Epic.

All Prices are in Canadian Dollars 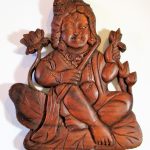 This is a very unusual wooden hand carving of Baby Krishna from Bali. Krishna is a re-incarnation of the very important Hindu god, Vishnu, the Preserver of the Universe and Mankind.
There are many stories of Baby Krishna in sacred Hindu literature. 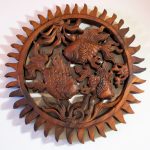 – Quite a lovely Balinese hand carved wooden panel of fish. 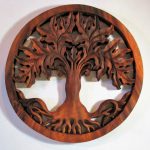 – Another wood carving from Bali. – This time of a tree. This is another wooden relief hand-carved Balinese rural scene with a man working in the rice fields and a woman carrying a basket on her head. Women often carry items on their heads in Bali. The Balinese live very close to nature and make wonderful representations of the flora and fauna of their surroundings. This handmade relief carving is of birds in the forest. Another handmade relief wooden carving of birds from Bali. A lively looking dragon, hand carved and painted in Lombok. The base has a mother of pearl design. This beautiful, intricately hand-carved and hand-painted wooden picture features two trees with leaves and fruit and two birds. There is a detailed painted border around the picture and the frame has a mother of pearl design. The Balinese are such skilled artists that they can carve anything and are frequently asked to copy European designs. This hand-carved wooden picture is a fanciful blending of Celtic and Balinese elements. The man and woman’s braided hair turns into Balinese nagas or protective serpents. I have a photo of the carver holding his wooden creation. This intricately hand-carved small wooden picture was crafted in Thailand. Elephants are a popular subject in Thailand as they are plentiful and were traditionally used for work and other purposes. This hand-carved, hand-painted panel is of a dancer in the very popular Legong dance. The dance is performed by very young girls, and even in old age some women are remembered as being very good Legong dancers. The dance is extremely stylized. In the story, a wicked king abducts a beautiful young girl. Her brother tries to rescue her and the young girl begs the king to free her without a battle. However, the king refuses, and a bird comes to tell him that he will be killed. In this panel, you can see the bird wings, which have been attached to the young girl’s arms. These are smaller carvings of Dewi Sri. I almost always pick every item I buy, but this is one instance when I had someone in Bali buy and ship these Dewi Sris to me. As you can tell, they are not painted in traditional colours, but you can buy one or more for a low price. You frequently see processions in Bali of people wearing formal dress going to their temple for some special service. Men wear hats, jackets and sarongs and carry parts of their gamelan orchestra with them. Women carry their offerings on their heads. This hand carving has a stylized a protective naga (invisible to a tourist’s eye) which carries them. This hand-carved panel is from Thailand. Elephants with their trunks up are believed to be good luck. This intricate Thai dragon, hand-crafted in Thailand, features raised gold ornamental designs filled with pieces of clear and a few coloured mirrors. This dragon must be hung vertically because of the position of its head.

This brightly coloured unusual hand-carved and hand-painted panel of animals is from Lombok. For someone with a taste for the unusual! Both of these panels were hand-carved in Bali. Also, I have a similar horizontal elephant panel. Do not use oil on these panels. This medicine container comes from Sumatra and is made of wood and horn. Three men are riding on the wooden horse, and animal and vegetation motifs are carved on both sides of the horn, as is a man at the horn’s point, sitting and holding his legs. The container has two sections and is held together with a horn peg. A very unusual piece! These carvings of gekos or lizards with mother of pearl patterns were hand-crafted in Lombok. This double – headed horse was hand carved in Bali. A good gift for horse lovers. Do not use oil on this carving. And now, something for bird lovers. This very elaborate bird was hand – crafted in Thailand. It is decorated with raised golden designs and pieces of green, blue and clear mirrors. This duck at the top of the picture was hand-crafted in Thailand. It is decorated with raised gold designs and pieces of green and clear mirrors. Two similar slightly smaller ducks are available.

The fine wooden bird at the bottom of the picture was hand-crafted in Thailand. It is decorated with raised golden decorations and pieces of green, red and clear glass mirrors. A flock of birds looks wonderful in a hallway or stairwell You may want a small tree to go with your bird. I have a tree and a bird on one of the walls of my bathroom. These small wooden trees were hand-carved in Lombok.